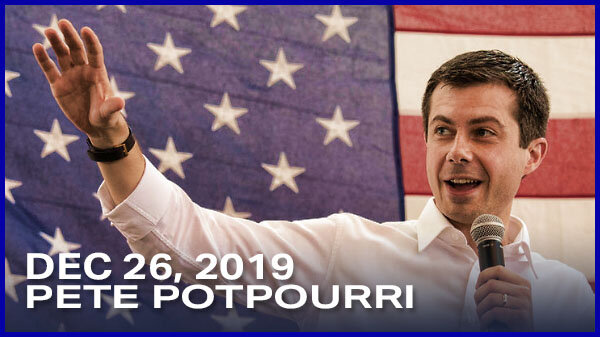 Pete tweets a series of answers to letters he’s received.

To Patrick, I am so proud of you. Thank you for summoning the courage to be you and I hope you’ll write me again in the new year.https://t.co/7Dforwxi9Y

.@PeteButtigieg is running for them. Chip in to help us build a brighter future → https://t.co/nI6q2zSVg9 pic.twitter.com/ibRbLoMdpt

Bigotry isn’t exclusive to one political party, race, religion, sexual orientation, or any other demographic, and neither is the duty to fight it. To the extent that an economically privileged, white, gay man can use his experiences of being discriminated against to relate to an economically disadvantaged, straight, black woman—or vice versa—well, this is the stuff of which human connection and social progress are made.

Super fun read! Month-by-month predictions on the 2020 race. I agree with some of it, though I think Pete would trounce Trump decisively not just “barely.”

This article rightly points out that some Dems act like it’s a crime to be successful, even if you’re a generous supporters of liberal causes.

MONADNOCK LEDGER - Pete Buttigieg: a president who will listen - By LINDA QUINTANILHA

I’m proud to have had a small voice in the process, and I’m proud to be a Pete supporter. I’m even prouder to be a New Hampshire citizen that can say first hand that even in today’s political environment, all of our voices can be heard, we just have to decide to vote for the candidate who listens – and that candidate is clearly Pete Buttigieg.

Just in: @PeteButtigieg will be only the second 2020 candidate to host a rally in Keene's Colonial Theatre. He'll also be coming to our editorial board that day, Jan. 2.

The only other one to take a crack at filling The Colonial? Bernie Sanders on his 1st 2020 NH stop. #FITN

Someone they can look up to. pic.twitter.com/4Lk19cSrmu