Pete Buttigieg / Pete For America videos. This page includes the best of Pete’s stump speeches around the country.

This is a fantastic stump speech and Q&A. Just a few weeks out from the Iowa caucus, Pete hammers his message home.

Emerson Theater, Boston. Sold-out crowd of 1700 people. Tons of energy and love. Great stump speech and Q&A. This is one to share!

Pete’s largest grassroots rally yet — over 2500 people. And one of Pete’s best stump speeches. Must watch!

Good stump speech and Q&A in Sparks, Nevada. The power goes at towards the end of the Q&A so people hold up their phones and Pete finishes without a mic. He gets the crowd to sing “Happy Birthday” to Connor, a regional organizer.

Today’s Nashua NH town hall is availalbe on C-Span. It looks like the video starts a little ways into the speech. There’s some good Q&A on this one.

Today’s Nashua NH town hall is availalbe on C-Span. It looks like the video starts a little ways into the speech. There’s some good Q&A on this one.

Highlights:
Greenland - at the start
What is your relationship to President Obama? (15:50)
Should every highschool grad do national service? (21:40)
Supreme Court Justices/Mitch McConnell (24:40)
What’s your favorite symphony? (27:35)
Climate Change question (30:40)

There was a large turnout in Cornish, NH. The crowd was 517 in a town of 1600 people. According to the organizer, former Senator Peter Bulring, the crowd size and enthusiasm is the largest he’s seen since starting these events in the mid 1980’s. The next closest was Al Gore. (LINK)

FULL VIDEO OF CORNISH EVENT (or mostly full). There’s a glitch near the end.

Pete Buttigieg gives a rally to a sold-out crowd in Portland, Maine. His stump speech is followed by a Q&A.

Highlights:
What is the one thing Trump lacks that you would bring to the presidency? (20:10)

VIDEO of when Pete takes the stage (from the crowd)

I was in the audience for this one! Great speech includes more of the Douglass Plan than usual and then a Q&A with terrific questions on trans rights, school shootings, Mitch McConnell, and more.

Comments on Fairfield:
A couple of Fairfielders have told me that the crowd for @PeteButtigieg is the largest crowd in Fairfield for any political candidate since Barack Obama in 2007 (TWEET LINK)

UPDATE: The chief of police said the crowd was about 500 people. The population of Fairfield is 9500. (LINK)

Pete speaks to a large crowd at the Iowas State Fair. He gives a rousing stump speech and has a fun Q&A with the crowd. Fair food?

Great stump speech rally in Orlando. There’s a terrific introduction by the mayor of Parkland, Mayor Christine Hunschofsky, and another intro by Commissioner Patty Sheehan, the first openly-gay elected official in Central Florida.

This event includes a lengthy stump speech and Q&A. Gun violence is addressed along with climate, health care, DACA, and immigration.

This video attached to the image at left is HD but doesn’t include the intros. You can see them here.

Pete Buttigieg speaks to millennials about his millenial candidacy in Des Moines. Great 30 minute introduction to Pete’s vision for the future.

Highlights:
"The other impact of this incident for better or worse--and I'm going to make sure that it's for better--is [that] I am going to be one of the white politicians in America who gets the most questions about race, I just am, let's use that as an opportunity to have a conversation that a lot of white audiences haven't been ready for." (30:43)

The capacity crowd is wild for Pete Buttigieg at this event. Pete gives a great stump speech and there are some fun Q&A questions. Worth a watch! 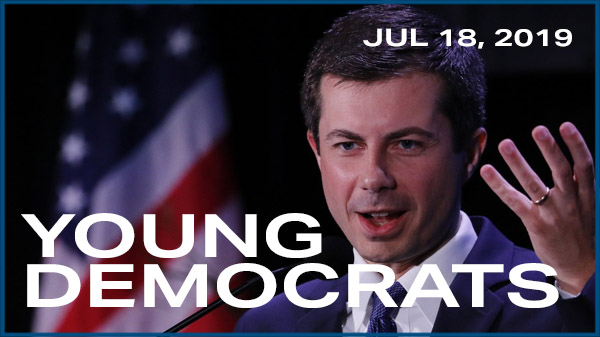 Pete gives a rousing speech at he Young Democrats Convention..

Highlights:
Pete comes on (2:22)
“To come of age in the 21st century is to see virtually every prediction and policy idea advanced by the Republican party fail when actually put into practice.” starts at (6:48)
”We’re not Democrats because of idealism. We’re Democrats because of reality.” (8:21)
“When everyone knows damn well she’s from Minnesota. That’s her home.” [Ihan Omar] (10:00)
“They’re burning down their own house and now the whole neighborhood’s on fire. (11:20)
“The Reagan era ends with us.” (12:24)
”That’s why I see a better future. Not because I’m unaware of the problems in our past and future, but because I can’t afford to go back.” (17:15)
“The whole reason we have politics is to make things better at home. Not in our gilded towers but in our high school hallways.” (20:00)
The Young Dems convention 2055 (20:45)

Pete visits Tennessee for the first time on the campaign trail. The crowd of over 1000 was fired up! This is a terrific speech.

Pete was one of 10 candidates at this Dover Corn Feed event, so this is a short and sharp version of his stump speech. Rousing!

This is a great early stump right after Pete announced. Made extra special when Chasten joins Pete on stage for Q&A.