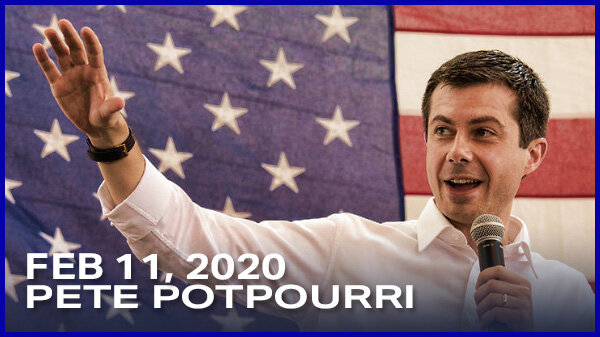 A reporter asked Pete Buttigieg in Nashua how he was feeling-- he told the reporter, "Feeling fantastic, shaping up beautifully." pic.twitter.com/T642aANC3w

When Democracy Dies in Darkness but it’s the day of the N.H. primary so everybody seems perfectly fine being up before the sun. pic.twitter.com/K6kmWhQ0de

An honor to welcome @PeteButtigieg to Ward 1!

Let’s get out there and 🗳 NH! pic.twitter.com/wMhYFOSwSo

Dem activist and former Executive Council Candidate Gray Chynoweth greets Pete Buttigieg at his first stop of the day, a polling location in Manchester— Chynoweth endorsed Buttigieg in January, and enlisted in the US Navy Reserves because he was inspired by Buttigieg’s service. pic.twitter.com/Tv5a8q1qLS

"Pete Buttigieg leads in support among Dartmouth students who indicated they plan to vote in today’s Democratic primary." @Dartmouth4Pete #StudentsforPete@Lis_Smith hope your alma mater made you proud today!https://t.co/BQdS5DLC4D

For too long, we’ve shied away from the most effective response to mental health and addiction: evidence-based treatment is how we help those with substance use disorder heal and transform their lives with dignity. pic.twitter.com/mhxiQ1A6ZD

It’s people like Pat that make this campaign so special. Pat, thank you for bringing a smile to my face on the most stressful of days and giving me a famous Pat hug when I need it the most.

There will always be a special place in my heart for this woman.

INTERVIEW WITH ANNIE KUSTER ABOUT PETE

AUDIO INTERVIEW ON BOSTON PUBLIC RADIO - 20 minutes of Annie talking about Pete’s strategy, his campaign, and her #WhyPete. Fantastic!

WATCH: New Hampshire votes in first primary with Sanders and Buttigieg in close race #MTPDaily @RepAnnieKuster: "I think you will see a very different field tomorrow morning ... I think you're going to see a dramatic shift in this race." pic.twitter.com/P29lUmVNYT

WOW. The word from the ground in NH… Pete crushes it.

Lisa knows her stuff so I think she's got this right. Man, it looks cold there, though. https://t.co/Q8awPrysfL

“I’ve had one of my Republican colleagues say they’re afraid of him because they know that Trump will not have an affect on him because he listens to the question, he thinks about it, and then he gives a really spot-on answer," says one NH voter about @PeteButtigieg #NHprimary pic.twitter.com/TvdsaifBjs

CBS digs into all the misinfo spread about Pete by online bots.

We eliminate trolls by using our minds, and then voting. https://t.co/9pUeOQJVLg

A beautiful rant from a Pete supporter (nsfw)

As NH voters head to the polls, @VictoryFund's Andre Adeyemi shares a personal story about when he worked with @PeteButtigieg in South Bend. pic.twitter.com/PrKkjJiLqX

THE WASHINGTON POST - By any measure, Buttigieg is Trump’s proven superior

If the former mayor ends up facing Trump, the most vivid and immediate contrast would be ethical rather than generational. By any measure of public or private character — basic honesty, service to country, family values, tolerance, concern for the vulnerable, commitment to the common good — Buttigieg is the president’s demonstrated superior. Just ask: Which human being would you, as a parent, want your son or daughter to grow up to be like? The question answers itself.

MEDIUM.COM - Buttigieg, Bernie, and the Billionaires by Daniel Weeks

Really interesting look at Pete’s history of thinking about campaign financing written by one of his Harvard classmates.

THE WASHINGTON POST - Pete Buttigieg made history. Why has no one noticed?

It is precisely Buttigieg’s identification with bedrock conservative American institutions such as marriage and the military that make his gayness palatable to millions of non-gay Americans. It may also be why nobody noticed that a gay man won the Iowa caucuses.

Feels great to finally be able to vote for @PeteButtigieg!

Today- I voted to #TurnThePage towards a brighter future and a unified country and couldn’t be more proud!

Get out and vote! #nhpolitics pic.twitter.com/jNTh1LG31v

New Hampshire Exit Poll:
Who is “about right” on the ideological spectrum: